A Look at the Unrelenting Stress of Public Safety Professionals

Public safety professionals have experienced numerous stressors over the last few years. They’ve served our communities through COVID-19, a toxic political environment, societal conflict and division, staffing shortages, and many more. Dr. Steven Nicholas describes these professionals as, ‘Warrior Servants’ – public servants who dedicate their lives to helping others. He says, “their emotional needs are different from the general public.” These are human beings doing extraordinary things on a daily basis, in an effort to keep others safe.

There are many persistent stressors that public safety professionals have faced over the last few years. According to the National Police Foundation’s Staying Healthy in the Fray Guidebook, first responders have experienced: increased duty-related deaths (related to COVID-19), staffing shortages due to illness, disrupted family routines due to illness, extended shift work, and reduced operating budgets. In addition, law enforcement personnel have experienced increased scrutiny of policing, polarizing narratives on social media and legislation that impacts policing practices and enforcement. While at the same time there has been an increase in violent crimes, assault on officers, real and perceived lack of support by the public and elected officials, physical and verbal attacks. All of this has resulted in difficulty in recruitment and retention, which has impacted those who are on duty by increasing shifts and lowering morale.

The National Police Foundation describes the many ways first responder’s health and well-being has been impacted over the last few years. This includes increased feelings of stress and overwhelm, fatigue, substance use (both alcohol and drugs), unhealthy eating habits (overeating or eating unhealthy foods), extreme exercise, obsessive behaviors, withdrawal from loved ones, and self-destructive behaviors. Further, according to Dr. Holley Kennedy-Hansen, an integrative care psychologist for Kaiser Permanente, 85% of first responders experience symptoms related to mental health conditions, and first responders are 5 times more likely to experience depression and PTSD than the general population.

Not only are first responders more likely to feel exhaustion from chronic stress, but they are also regularly exposed to trauma. As Dr. Steven Nicholas puts it, “Most folks will have a handful of horrible days throughout our lifespan. We will suffer losses, we have relationships dissolve or erode, and there will be tragedies. Our first response cultures have those too as average humans; however, they also sign on for showing up every day for the public. They have the first-degree trauma and loss in their own lives, and then they get the secondary trauma or vicarious trauma impacts because they are showing up on your worst day.”   first responders are with the general public on their worst days, yet it’s just another day at work for them”. This reality, plus whatever they are experiencing in their daily lives put them at an increased risk of experiencing mental health challenges. According to the National Police Foundation, roughly 30% of law enforcement officers experience symptoms of Post-Traumatic Stress Disorder (PTSD). Obuobi-Donkor et al. (2022) conducted a review on the prevalence and determinants of PTSD among firefighters and military personnel. They found that 57% of firefighters and 37.8% of military personnel experience symptoms of PTSD. Factors that predicted PTSD included: demographics (i.e., age, gender, marital status), job-related factors (i.e., length of service, mandatory overtime, poor leadership, constant policy changes), social support (i.e., family relationships, discord among crew members), injuries, physical and psychological factors (i.e., sleep deprivation, childhood trauma), and individual traits (i.e., low self-esteem, low self-efficacy). In addition to PTSD, frontline workers at increased risk for anxiety and depression. Over the course of a career, exposure to trauma can add up.

As we investigate the impact of this work, Hans Selye, who is known as the father of stress research, described General Adaptation Syndrome (GAS) which he first published in 1946. GAS can be thought of as a basic overview of how the body reacts to stressful events. Selye identified three stages which include: alarm reaction, resistance, and exhaustion. It is the body’s way of adapting to a perceived threat in order to survive. The GAS theory is important to understand as we look at the long-term implications of persistent stress on the public safety workforce.

A distress signal is sent to the hypothalamus.

Stress hormones (i.e., adrenaline and cortisol) are released to give a boost of energy, which increases heart rate, blood pressure and insulin.

The sympathetic nervous system (fight or flight) is activated.

The body works to counteract stressful event, by signaling the parasympathetic nervous system (reducing cortisol production), and the heart rate and blood pressure begin to return to normal.

If the stressful situation doesn’t go away, the body will stay in alert and stress hormones continue to be produced, which can lead to irritability, difficulty concentrating, and frustration.

If the body remains in an extended period of stress, then the body enters the exhaustion phase. The body’s energy resources are depleted, and the body no longer has the energy to fight the stress. This can look like: anxiety, depression, fatigue, burnout, compassion fatigue, inability to cope, decreased immune response, and chronic health conditions

It is of critical importance that we support first responders to recover from Stage 3: Exhaustion efficiently and effectively. The body skillfully knows how to respond to stressors, but when experiencing chronic long-term stress – there is a significant impact for both physical and mental health. In addition, when a person is living with chronic stress, and possibly experiencing PTSD this impacts their ability to perform on the job. Public safety professionals must have good situational awareness, focus and concentration, effective communication strategies, and ability to handle themselves in stressful situations. All of these are diminished when experiencing long-term chronic stress and exhaustion. The potential ramifications of not addressing chronic stress (for both our communities and the people serving them) is massive.

Frontline workers are already resilient, it is the nature of the work they do. With a smaller workforce, it is imperative that we find ways to take care of those who serve our communities. Dr. Holley Kennedy-Hansen shares that, “first responder mental health is a complex and evolving subject — and additional stressors have been brought on by COVID-19. There’s no one-size-fits-all solution, but there are ways to help support those who are serving.” Below are important considerations for how to care for frontline workers.

Through continuous education, training, and support, the stress experienced on the job can be mitigated. This can help protect public safety professionals from burnout, help them to manage stress better under pressure, and recover faster after traumatic experiences. The health and well-being of the public safety workforce is at a precipice and now is the time to support them. 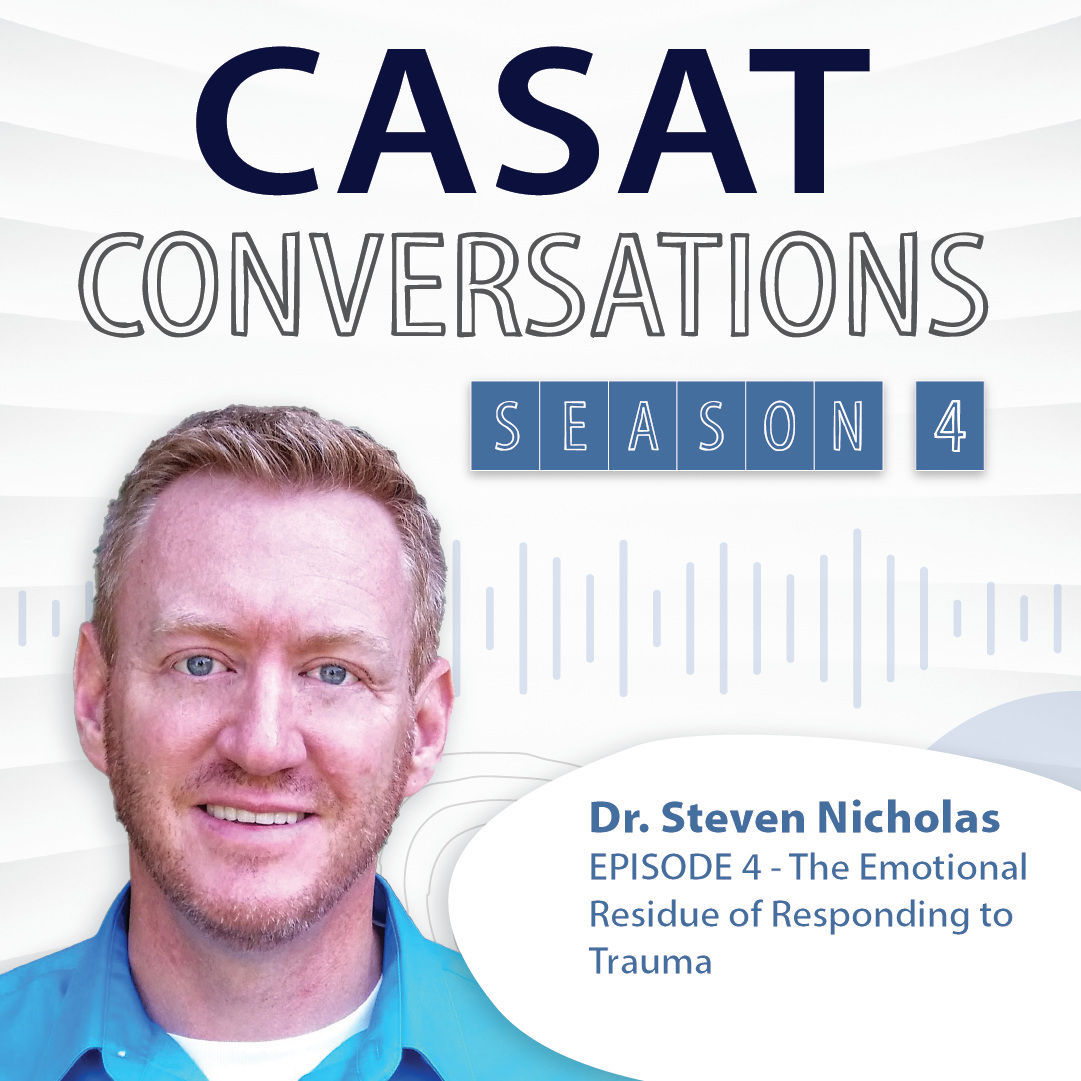 Listen to Season 4 of CASAT Conversations. Season 4 delves into the topic of secondary and vicarious trauma experienced by people who work in the field of human services. You’ll hear from researchers, authors, clinicians, and people with lived experience who share about the importance of this topic, along with ways to care for yourself, and the value of having a community of support. In each conversation, we hope you find a nugget of information that will support you in the work you do. Listen to episode 4 today! In episode 4, you’ll hear from Dr. Steven Nicholas an author and practicing marriage and family therapist. He shares about his work with first responders and highlights how their emotional needs are different from the general public.