Suicide and The Crisis Text Line

Suicide is the tenth leading cause of death in the United States. It is the 3rd leading cause of death for people aged 10-14 and the 2nd leading cause of death for people aged 15-24. One in five adults experience mental illness. Approximately 1 in 5 youth aged 13–18 (21.4%) experiences a severe mental disorder at some point during their life. For children aged 8–15, the estimate is 13%. Many Americans lack access to care and there is a serious mental health workforce shortage, in states with the lowest workforce’s there can be up to 6 times the individuals to 1 mental health professional. With mental health worsening and the lack of providers in certain areas, many individuals will look for other methods to help when in crisis.

In 2013 the Crisis Text Line was launched. It was the first around-the-clock hotline in the US to provide services through text messaging. Users can text in via the number 741741 at time and talk to a crisis counselor who has undergone six weeks of extensive training. Today’s youth commonly prefers texting to talking on the phone. Three-quarters of Crisis Text Line’s users are under 25 years old and 12 percent are under 13. With the rise of mental illness among children and youth the Crisis Text Line provides an effective counseling in a crisis.

Texting can also provide an immediate solution to a problem. A telephone hotline requires the user to be able to find a private place where they can have a conversation. The user might also be crying and hyperventilating which can cause a conversation to go on longer. With texting the user can contact crisis counselors from virtually anywhere and get right to the chase. Texting also offers anonymity. Almost two-thirds of the people who text in tell the counselors something they have never told another human being.

To date, there have been 65, 671,191 messages exchanged since August of 2013. Nancy Lublin, the founder of Crisis Text Line has made it her mission to use the data from the texts to help identify when and where problems are spiking and what interventions are needed. Identifying details like names, addresses, and birthdays is scrubbed from the data before it’s shared with researchers. There is almost no real-time open data on most mental health issues. Very few data sets are as general (cutting across issues) or as large. Crisis Text Line has a unique and large set of data on teens and mental health that can inform the public and media, shape government and school policies, and drive cutting edge academic research.

The Crisis Text Line also has partnerships with many national and state level non-profit behavioral health facilities as well as with Universities who are conducting in depth research. The state level partnerships are located in states that the hardest hit with mental health disparities. The Nevada Coalition for Suicide Prevention is one of the many partnerships. 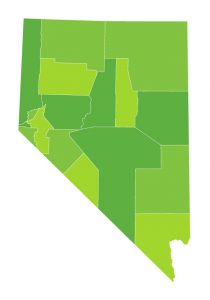 Nevada has had some of the highest suicide rates in the Nation for many years. In fact, 2015 was the first year that Nevada was not in the top ten list for death by suicide. While the number has been slowly improving as a whole, the amount of persons aged 10-34 has been increasing. Currently suicide is the second leading cause of death among this age group.

This is where the aggregated data from the Crisis Text line becomes helpful. The free website allows users to filter by state and behavioral health issues. If the page is set up to filter by Nevada and suicide, users will able to see that Nevada ranks 9th for people texting in with crises related to suicide.  It is also possible to see co-occurring issues. For example, 39.3% of texters in Nevada who text about suicide also have a co-occurring issue with a relationship. It is also possible to see the amount of texters in Nevada experiencing suicide on a particular day and time. Users are 16% more likely to feel suicidal at Mondays with 18% of them texting in around midnight.

Crisis Text Line is not a replacement for mental health care, but it can be a stepping stone for individuals who are feeling lost and alone. Crisis counselors are trained to take texters from hot moments to cool moments. Towards the end of the conversation counselors ask the texter if they would like a recommendation for a long-term resource.  Their philosophy is that intervening at the right time, with referrals to a network of organizations on dozens of different issues, can make a lasting difference in someone’s life.

For additional information on this topic and other behavioral health issues check out our learning lab and Resources section as well as future training’s from CASAT.

This article was developed by Karen Bowers at CASAT, feel free to use this information. A link to our site and attribution would be much appreciated.