Sex Trafficking and the Game

For decades Nevada held the distinction of being the divorce capital of the United States, the only state with legalized gambling, liberal drinking laws, and a thriving legalized prostitution industry. As mores and laws have changed across the nation, Nevada has shed much of its Wild West persona and has become more similar to states like California, Oregon, and Idaho.  People now stay home to divorce, gambling is legal in all but two states, and statistics show that drinking is a problem everywhere. Legalized prostitution does remain in Nevada, but only in some of the smaller counties. Yet a walk down the Las Vegas Strip, or Main Street USA, shows that legality does not stop prostitution from thriving outside of normal jurisdiction. Much of this unregulated prostitution is unfortunately part of a well-hidden issue affecting individuals from all states: sex trafficking.

Detective Derek Jones of the Reno Police Department (RPD) recently gave an enlightening CASAT training called “Sex Trafficking and The Game”. He opened the presentation with a clip from Will Ferrell’s movie The Other Guys showing a somewhat humorous view of being a Pimp.  He explained how this scene and others from movies like Liam Neeson’s Taken have likely given society a biased view and helped propagate other myths and misconceptions of trafficking.  Many participants assumed that trafficking mainly involved foreign girls from other countries, but Detective Jones quickly debunked that myth. He said that local youth, often from broken homes and with traumatic pasts, are exploited right here in Nevada.  He explained how many of the special events, such as Hot August Nights and Street Vibrations, are very lucrative for traffickers as girls from around the region are brought to Reno during these times. During the rest of the training Detective Jones described the history of prostitution, explained the complicated pimp/prostitute relationship, and shared the heartbreaking numbers that define sex trafficking within the United States:

A $99 billion global industry is hiding in plain sight.

According to the Department of Homeland Security sex trafficking involves the use of force, fraud, or coercion to obtain some type of labor or commercial sex act.  While not all prostitution is necessarily sex trafficking and some women willingly work in the profession, the reality for those who are not willing workers is very dark. The Nevada Sex Trafficking Campaign put together the documentary Trafficked No More to describe sex trafficking in Nevada.  The movie tells the story of a vulnerable young girl who was enticed into the lifestyle, known as the game, only to become a tragic victim.  She shares her thoughts and fears as she stumbles deeper into the cruel reality. While the documentary highlights one individual story, many victims share similar experiences such as falling in love with a flattering and manipulative pimp one day to suddenly being scared and alone in an abusive relationship the next.  The movie states that many victims begin working between the ages of twelve and fourteen and are raised to believe this is the only life they are worthy to live and those trying to help or are outside of “the game” are evil. The film shows how the combination of physical, psychological, and social pressure make it a difficult life to escape.

Along with the documentary, Nevada is fighting sex trafficking on other levels.  Reno based Awaken and Las Vegas based Embracing Project are two local organizations working to help those involved in sexual exploitation. At the governmental level Nevada passed Assembly Bill 67 in 2013 in their attempt to fight against trafficking. This bill puts more of the punishments on the pimps and Johns, the buyers, by increasing sentences for those who traffic. Former Attorney General and current US Senator Catherine Cortez Masto said of the bill, “AB67 establishes the crime of sex trafficking in Nevada, provides harsh penalties against the convicted perpetrator, and focuses on the protection of our victims — to restore them and restore their dignity by building the infrastructure to support their recovery.” She continued her remarks with the Las Vegas Review Journal by explaining that the bill generally casts prostitutes as victims in need of social services instead of labeling them criminals.

From the behavioral health and social services standpoint, it is important to be aware of current trends to best assist the girls and boys trapped in this dangerous lifestyle?  Trafficked no More explained various warning signs that could indicate someone has entered “the game.” The documentary said that early warning signs may be witnessing a young person who suddenly begins skipping school, earning lower grades, and/or comes home with gifts like new nails or hair-cuts that they clearly can’t afford.  More dramatic changes that often occur once the “honeymoon” period ends are tattoos, changes in the way the child speaks…ie using slang like Daddy and tricks, and finally running away during the weekend. Detective Jones provided a handout that goes into further details on other ways to identify sexually exploited youth. The Blue Campaign (see image below) from the Department of Homeland Security also provides a list of several more indicators.  All the above signs and indicators are concerning changes that professionals can explain to families, friends, and schools to hopefully prevent someone from becoming a victim. 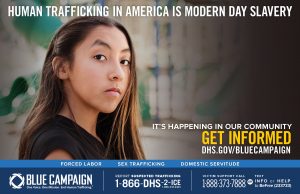 Trafficking in the News

Detective Jones and the RPD and local organizations like Awaken and the Embracing Project are working hard in Nevada to resolve sex trafficking, however there are no easy ways to fix the issue.  These groups and other international organizations like Polaris and Human Trafficking Search, are continuously doing research, working with victims, and spreading awareness to try and improve those in or affected by sex trafficking.  The US government took a drastic step in April 2018 against trafficking by forcefully shutting down the Backpage website, the number one online site for this business.  While many lauded this seizure for helping protect women and children who are possibly being exploited, many of the women working on the site are devastated and afraid for their lives. As the demand for sex is not going down, the women fear they will have to return to riskier methods, such as walking the street and finding Pimps, to put food on the table.

There is no easy fix to this issue.  As professionals it is important to be prepared and on the lookout for the young adults in the commercial sex industry who need assistance.  It is vital to remember that the boys and girls who have been trafficked are victims and not criminals.  Further information on trafficking and other behavioral health topics is updated regularly on CASAT OnDemand. The number for the National Human Trafficking Hotline is 1-888-373-7888.